In 1976, Victor Gollancz commissioned Angela Carter to translate Charles Perrault’s Histoires ou contes du temps passé avec des moralités (1697). The book was published the following year, and included both well-known tales such as Cinderella, Little Red Riding Hood and The Sleeping Beauty, and less familiar ones such as Bluebeard, Ricky with the Tuft and Donkey-Skin. As with her own compositions in The Bloody Chamber and Other Stories (1979), Carter’s translations of Perrault’s tales are more appropriations than faithful transcriptions.

As Jack Zipes puts it in his Introduction to the Penguin Classics edition of the book, Carter was not an “obedient goddaughter” of Perrault, but rather “an unruly, mischievous ‘child'”, remaking Perrault’s tales “into something different from what they were”. Zipes also usefully explains two of the most substantial changes Carter made to Perrault’s tales: she turned all of the verse morals that follow each tale into “prosaic folksy proverbs that often contradict What Perrault endeavoured to communicate”, and she added various phrases to the tales in order to give them a more “folk” atmosphere, thus returning these literary tales to their origin in oral storytelling.

The original 1977 publication by Gollancz also included wonderfully disturbing illustrations by Martin Ware, an artist and print-maker trained at the Royal College of Art. His illustrations capture the fluidity of identity in fairy tales, for example the ways in which human beings often transform into beasts, and vice versa. The book is still in print today, but the illustrated editions are only sadly available second-hand, though relatively easy to obtain. Enjoy looking at some of Ware’s illustrations below. 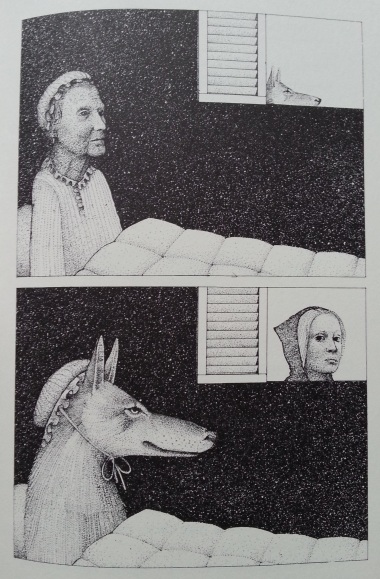