Mexican painter Frida Kahlo was born on this day, July 6th, in 1907. To celebrate this most extraordinary artist, here are a selection of passages from Angela Carter’s preface to Images of Frida Kahlo, published in 1989 by Redstone.

“[P]ortrait photographs of Frida Kahlo resemble the face in her own pictures so closely that her eyes seem to have had the power to subvert the camera, making it see her as she saw herself, as she makes us see what she sees when she paints.”

“[W]ith Frida Kahlo, the raw material remained – raw. The wounds never healed over. […] The expression on that painted face, unchanging over the years, is one of enigmatic stoicism and she displayed her wounds like a martyr.” 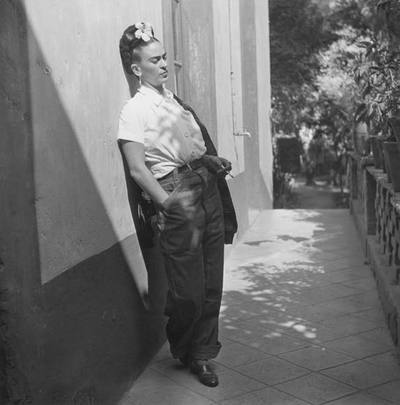 “When she was a girl, before her accident, before she married Rivera, she used to pose for photographs en travestie. […] But in this picture, the jacket and trousers are much too big, billowing, voluminous. Has she put on her enormous ex-husband’s clothes, in order to comfort herself? Or do men’s clothes no longer fit her, as they once did?”

“Although Frida Kahlo […] liked to give 1910, the year of the Mexican Revolution, as the date of her birth, you could say she was not really born until the disastrous accident that broke her. Her work as a painter came out of that accident; she painted in order to pass the time during the lengthy period of recovery nobody had really expected.”

“Women painters are often forced to make exhibitions of themselves in order to mount exhibitions. Fame, notoriety, scandal, eccentric dress and behaviour – Rosa Bonheur, Meret Oppehheim, Leonor Fini, Georgia O’Keeffe, Frida Kahlo. Fame is not an end in itself but a strategy. […] Frida Kahlo’s transition from the status of maker of tiny, charming paintings on tin in the naive style to publicly acknowledged major artist was assisted, not hindered, by her growing fame as the beautiful wife of the Mexican muralist.”

“When she was well enough, she painted the strangeness of the world made visible.”

“‘VIVA LA VIDA’, she scrawled on her last painting, when she was about to die.”