On Friday 9th December, I had the privilege of attending a private viewing of the exciting new exhibition at the Royal West of England Academy (RWA), entitled Strange Worlds: The Vision of Angela Carter. Spread across multiple rooms, the exhibition features both historically significant art works by, for example, Marc Chagall, William Holman Hunt, and Leonora Carrington, and works by major contemporary artists such as Ana Maria Pacheco, Eileen Cooper and Paula Rego. The exhibition thus points in two directions: it looks back at the artists and art works that Carter drew on for her own creative endeavours and looks forward to contemporary artists who in turn were inspired by Carter’s own works. Wandering around the exhibition was thus doubly-strange, for not only did the subject matter of most of the pieces explore the strange, the uncanny and the disturbing, but the connections between the various works on display, and between those works and Carter’s own oeuvre, created a strange sense of temporality. At best, then, it was like sleepwalking through an intense dream in which the distinction between different time periods is blurred. 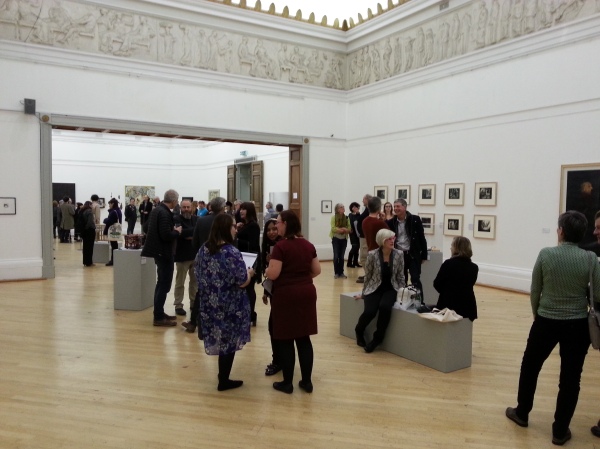 The exhibition is curated by Fiona Robinson (RWA) and Marie Mulvey-Roberts (UWE), and they have done a superb job of selecting and displaying many wonderful pieces. There are too many pieces to discuss here and I don’t want to spoil too much so I will just mention a few personal favourites here. Heather Nevay’s The Murder (2014) features an uncanny set of twins gazing rather menacingly at the viewer, whilst just behind them lies a murdered figure amidst a set of highchairs and a ladder. It took me a minute or so to recognise, with a building sense of unease, the numerous birds, Hitchcock-like, filling the trees and sky. In the exhibition book, Nevay refers to the influence that Carter had upon her own work:

“The Magic Toyshop was my introduction to Angela Carter’s work. It changed the landscape of my imagination. The power of the underlying threat, fear and suppressed sexuality running throughout the book illuminated the strength of suggestion, building a fecund atmosphere in which the world of The Magic Toyshop existed, but wrapped within the exuberance and beauty of her vocabulary.”

By contrast, Di Oliver’s The Fairy Tale (2005) features a sleeping doll, curled up between the pages of Lorna Sage’s book Moments of Truth. The latter contains an essay on Angela Carter entitled ‘The Fairy Tale’, which can be seen in Oliver’s piece. Oliver highlights both the importance of fairy tales and Carter’s own Gothic tales for her work:

“Angela Carter’s books gave me a wonderfully subversive new way of regarding those gothic tales and images, allowing me to be playful with the dark images of my childhood and see that, unlike the heroines in the fairy stories of my childhood, I could control the dark forces at work in the images.”

Lastly, Simon Garden’s 2015 painting ‘The Follower’ is a de Chirico-esque piece that explores the subconscious imagery that often pervades Carter’s works, including not only her re-worked fairy tales but also surrealist works like The Infernal Desire Machines of Doctor Hoffman (1972). Garden notes that Carter first made an impression on him through her “imagery of the subconscious”, her talent for describing “the look, feel, and surface texture of places and things” and her “intensely visual imagination”. One association that this painting created for me was the empty seaside town that Desiderio visits in Doctor Hoffman, a hauntingly empty place whose inhabitants he later describes as like inert mannequins.

In addition to the historical and contemporary art works, the curators have also added a number of other gems for Carter fans, including framed illustrations for some of her works (such as those by her friend Corinna Sargood), various book cover designs, and some of Carter’s own art works (there are a few other wonderful surprises which I will not spoil here!)

As I briefly alluded to earlier, accompanying the exhibition is a wonderful book published by Sansom & Company, which contains essays by the curators, reminiscences of those who knew Carter, including Christopher Frayling, Marina Warner and Carmen Callil, and a number of reproductions of the art works on display at the exhibition with accompanying notes by the artists. After spending a couple of hours walking around the exhibition, it was pleasant to sit down at home and browse through this book, hearing stories about Carter and learning about the influence she has had on a number of contemporary artists.

In her essay for the exhibition book, Marie Mulvey-Roberts discusses the choices she and Fiona Robinson made in selecting the works for the exhibition. William Holman Hunt’s The Shadow of Death (1870-73), for example, was chosen because it was featured in Carter’s controversial film The Holy Family Album, which reimagines the history of religious paintings as a series of photographs in God’s photo album. Mulvey-Roberts notes that Carter was “fascinated with the work of the Pre-Raphaelites”, which can be seen, for example, in her first novel, Shadow Dance (1966). In this text, the main character has a “tormented face resembling that of El Greco’s Christ.”

Marc Chagall’s The Blue Circus (1950), a piece that features a woman on a trapeze with a bird on her leg, was selected not only because of the obvious link to Nights at the Circus (1984) but also because of the close proximity of the human and the animal, a distinction that Carter often blurred in her works. Mulvey-Roberts reproduces a quotation from Susannah Clapp’s A Postcard from Angela Carter, in which Carter speaks of her desire “to make images that are personal, sensuous, tender and funny – like the […] paintings of Chagall”.

One work that was a pleasant surprise to see was Jeanne du Maurier’s The Bird Cage (undated), a painting that recalls Carter’s concern with women’s confinement, such as can be observed in her haunting short story ‘The Erl-King’. I was intrigued to learn that the RWA houses the largest public collection of du Maurier’s works, a painter whose reputation is considerably overshadowed by her sister Daphne.

In her essay for the book, Fiona Robinson begins by discussing some of the challenges that the exhibition presented for her and Mulvey-Roberts, such as how to fill the large space of the main RWA galleries, or the fact that any exhibition based on Angela Carter’s work would inevitably be provocative and make some viewers uncomfortable. Furthermore, since Carter’s work covers many different literary genres and aesthetic modes, the exhibition would have to be very broad. One particular challenge, though, concerned the nature of the relationship between Carter’s writing and the art works selected:

“In staging an exhibition predicated on storytelling it was vital to avoid the trap of selected art that, by its subject matter, served merely to illustrate her narratives. It was essential to search out work that resonated with ideas that Carter explored in her writing; that mirrored her complexity or for which her fiction had inadvertently provided a catalyst. The selection needed to be as open to possibilities as she herself was, to go beyond work that was directly inspired by her writing. It had to start from the premise of limitless potential. Was it possible to surprise those who knew Carter’s writing well, to offer a different interpretation, an alternative viewpoint?”

A good example of this, and one that Robinson highlights, is The Banquet (1985) by Ana Maria Pacheco. Whilst Pacheco’s work “embraces many of the ideas prevalent in Carter”, she has “never been influenced” by Carter’s works. Indeed, when I first encountered The Banquet, my mind was drawn more to writers such as Franz Kafka or Peter Greenaway’s film The Cook, The Thief, His Wife and Her Lover (1989). However, as soon as I started thinking about all those fairy stories in which people, often children, are gobbled up, I quickly made the link with Carter’s own work. Whilst this is not the only example, it does highlight the way in which the exhibition, as the curators had hoped and planned, can surprise those of us who know Carter’s work well by setting it in a different light.

There is, no doubt, much more that could be said about Strange Worlds and I look forward to visiting it again soon. However, rather than give away more of the exhibition’s surprises I will simply end this review by saying that this is a fantastic exhibition and one well worth visiting, especially for fans of Angela Carter’s work. It’s truly a pleasure to make connections between the works on display and Carter’s own writings, to learn more about the art works that Carter enjoyed and was influenced by, and to see how her legacy continues to grow and change through new works of art by contemporary artists.