A couple of weeks ago, I visited Bath for the day, and while there I decided to find the flat in which Angela Carter lived in the early 1970s. Whilst I have been to the city on numerous occasions in the past, this was my first time in the city after reading Edmund Gordon‘s biography of Carter in the autumn of 2016. In was in that book that I discovered that Carter had lived in Bath shortly after returning to England from Japan. 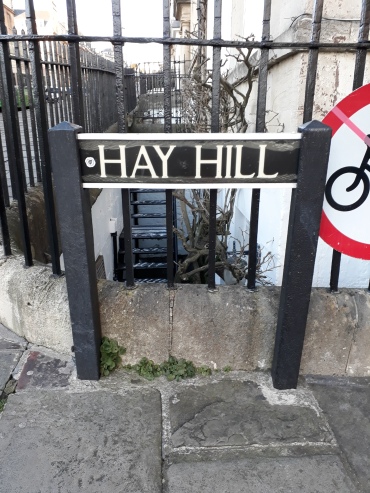 In The Invention of Angela Carter: A Biography, Gordon has provided perhaps the fullest account to date of her time in Bath. As he notes, Carter moved to Bath in the Spring of 1973, after two years of living in Japan. Staying first with her friend Edward Horesh in a house just off Bathwick Hill, Carter quickly found an apartment of her own: No. 5 Hay Hill. As you can see from the photographs, this is a tall and thin apartment, and Gordon observes that it was in much need of refurbishment when Carter purchased it. In a letter to a lover, Andrew Travers, Carter wrote about the novelty of owning her own home:

“It seems peculiarly amazing, to actually own this carapace of bricks and mortar. I don’t really understand the notion of ‘owning’. I feel it, all right; but I’m not sure what it is I feel.”

Despite seemingly shutting herself away from the rest of humanity, Carter did establish some significant friendships while living in Bath, in particular with Christopher Frayling. In his book Inside the Bloody Chamber, Frayling has written about both his relationship with Carter and their time in Bath. He remembers her flat being uncomfortably cold:

“On one occasion, in winter when she had no heat at all, she explained that she had bought a gas fire a while back, but that the men installing it had managed to break the thing”.

However, Carter claimed that it was “no bad thing […] to be a bit healthily cold.” Gordon offers a more prosaic reason for the lack of heat, claiming that Carter was “living well beyond her means”. Speaking of houses, Frayling also recalls Carter’s distaste for the Royal Crescent, which she found “pretentious and self-regarding – ‘it makes its pompous and baroque statement across half a hillside, generally giving the impression of knowing just how enormous an architectural occasion it is'”. The pair once discussed the contrast between the front and the back of the Royal Crescent:

“The front – a soft yellow facade, with the strange two-dimensional quality of a dreamscape. The back – with its shantytown of loos and bathrooms and ductwork […] The skull beneath the skin.”

In thinking about Carter’s time in Bath, it is important to note that this little-known and little-discussed period of her life was a productive one, contrary to some versions of her career. Frayling is particularly irritated by what he perceives as a critical consensus that sees Carter as only truly finding her literary voice when she moved to London. While it is true that Carter’s early texts have, in the last few years, begun to receive more critical attention, I think that Frayling is correct that her period in Bath has been marginalised if not written off entirely. Many discussions of her work tend to split her career into three broad phases: Bristol in the 1960s, Japan in the early 1970s, and then London from the late 1970s until her death in 1992.

Of course, it is not that her texts from the mid to late 1970s have not been discussed; on the contrary, The Bloody Chamber (to take just one example) has probably received the most attention of all her texts. However, while both her early and late texts are often spoken of in terms of their place of conception (“the Bristol trilogy” for the early texts and London for a text like Wise Children), the pieces written during the mid 1970s are rarely discussed in terms of Bath. This is strange, for as Frayling notes, the Bath years were “a transforming experience” for Carter, a time in which she conceived and/or wrote The Bloody Chamber, The Sadeian Woman, a number of articles for New Society, a translation of Perrault’s fairytales, and the completion of The Passion of New Eve and Comic and Curious Cats.

Carter herself wrote an article about Bath for New Society in 1975, a piece filled with astute observations as well as featuring her particular brand of humour (the article has since been republished in Shaking a Leg: Collected Journalism and Writings). Carter writes that Bath is “a masterpiece of town planning”, a city with “the theatrical splendour, [and] the ethereal two-dimensionality of a town of dream.” She continues:

“Marvellous, hallucinatory Bath has almost the quality of concretised memory; its beauty has a curiously second-order quality, most beautiful when remembered, the wistfulness of all professional beauties”.

However, this is only one side of the city, the beautiful and staged side with its glorious facades of yellow sandstone that takes on a golden hue when bathed in sunlight. Carter was also well aware, as Frayling notes, of the other side: the bohemian, alternative, and eccentric side. Writing of the city’s inhabitants, Carter jokes that the city has

Last but not least, it is impossible to talk about Carter’s time in Bath without recalling her hilarious remarks about the plaques dotted about the city – those monuments to the great and famous dead who once lived in there. As Frayling recounts, Carter was angry that the city had put up plaques for many of Bath’s most famous historical residents, such as Jane Austen, Henry Fielding and Charles Dickens, but not others like Thomas De Quincey and Mary Shelley. Carter encouraged Frayling to write a letter to the city council to petition a plaque for Shelley, who “didn’t just drop in, or eat the occasional Bath Bun at Sally Lunn’s” but who had “actually wrote the bulk of her novel in the centre of the city.” Sadly, the council replied that Mary had less of her claim to fame than her husband and mused that Frankenstein had more to do with Hollywood than Bath. Bearing this in mind, it is understandable, perhaps, that Carter was incensed that the city saw fit to omit Mary Shelley but nevertheless put up a plaque for one John Christopher Smith, friend and secretary to the composer Handel. As Carter later wrote: “Why not come out with it, ‘I was a sycophantic arsehole-licker.'”

For anyone interested in reading about Angela Carter’s time spent in Bath, I highly recommend the works mentioned above by Gordon and Frayling. Both writers have fleshed out a crucial and previously neglected period in Carter’s life, revealing the connections between the city and her literary project, as well as shedding light on many other aspects of her life, from her relationships to her politics. Just as Carter’s connections with Bristol have gained increasing attention in both popular and academic accounts of her life and works, so it seems time for the Bath connection to enjoy its own time in the spotlight.

3 thoughts on “Angela Carter and Bath”